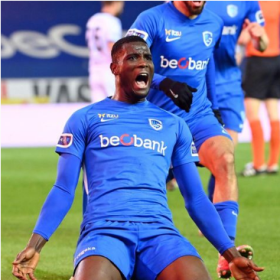 After struggling at the start of the season due to fitness issues, the Nigeria international is now back to his best, lighting up the Belgian Pro League over the last five weeks.

For the first time in Onuachu's career, he scored four goals in a single game as Genk thrashed RSC Charleroi 4-1 in the last round of matches and has notched 12 goals in his last seven league matches.

His performances would not have gone unnoticed by other clubs in Europe who are on the lookout for an experienced finisher.

The 28-year-old Onuachu has not hidden his desire to play in a top European League, with England his preferred destination.

Commenting on the future of Onuachu, Dimitri de Condé told Het Nieuwsblad, via Voetbalkrant : " We do not forget that we work with people. Although I know that Paul is very happy at KRC Genk.

"Moreover, no amount has been agreed for which he can leave. We will see what will happen. Although it goes without saying that we would like to keep him with us."

Onuachu, the top scoring African player in the history of Racing Genk with 80 goals, has less than two years to run on his contract with the Limburgers.