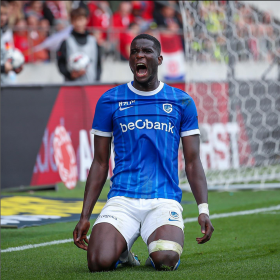 The official FIFA 23 Team of the Week 8  has been released with only one Nigerian player making the cut.

Racing Genk striker Paul Onuachu has been recognized for his outstanding performance during his side's 4-1 rout of Sporting Charleroi in a Belgian Pro League game on Friday, November 4.

For the first time in his career, the FC Ebedei product scored four goals in a single game.

The lanky attacker broke the deadlock from the spot in the ninth minute, doubled the lead after he was found via a free kick in the 35th minute, and restored Genk's two-goal cushion at minute 71 when the ball was put on a plate for him by Joseph Paintsil.

He netted his fourth of the game in injury time, taking his tally for the season to twelve in the league alone, all of them scored in his last seven matches.

Onuachu now has a higher overall rating of 82 and his best attribute is physicality at 85, while his other stats are 82 shooting, 74 dribbling, 74 pace, 66 passing and 48 defence..

Onuachu has been deployed as a striker in the FIFA 23 Team of the Week, Diaby is the center forward and Salah right winger.