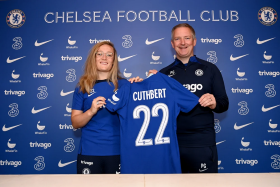 Through their official website, current Women's Super League champions Chelsea have announced that Erin Cuthbert has signed a new contract with the club.

The new agreement between club and player will keep the 24-year-old at Chelsea until the summer of 2025.

A product of the Rangers academy, Cuthbert has played nonstop at Chelsea Women for six years, after joining from Glasgow City.

She was part of the Chelsea squads that won the Women's Super League, FA Cup, Continental Cup and Community Shield.

Speaking after putting pen to paper, she said : "I’m delighted, it’s been a long time coming, but I’m happy to finally get it over the line. This is my club and this is where I want to be.

Cuthbert has earned 56 caps for Scotland's national team, scoring twenty goals, and previously represented the country at school, U15, U17 and U19 levels.