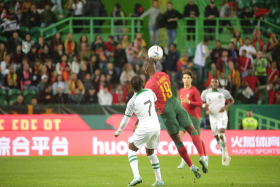 Nigeria lost 4-0 to Portugal in the national team's last match of the year 2022 in a one-sided  international friendly game.

Allnigeriasoccer.com here presents the player ratings from the Nigerian team.

Francis Uzoho  : The goalkeeper could not prevent the goals he conceded against a far better Portugal side.

In fact the Omonia Nicosia keeper had only made one good save of quality throughout the game, a fingertip save for a corner kick. 4/10. In terms of goals conceded, his worst performance in a Super Eagles shirt.

Osayi Samuel  : The new kid on the block showed plenty of industry and desire to impress the coaches in his first call-up to the team. 7/10.

Calvin Bassey : The left back gave out a couple of passes early in the game. His decision-making left much to be desired. There was a slight improvement in his performance in the second half. 5/10.

William Troost Ekong : The captain had a poor game on Thursday. His performance left much to be desired as he could not make some clearances and interceptions that eventually led to panic stations for the team. 4/10.

Kelvin Akpoguma : The Germany-based Super Eagles defender has always wanted to be a consistent player in the national team but from the basis of his performance, it is hard to defend his first team involvement.

It's best to say that he has other central defenders to contest for the starting lineup to pair Ekong. 5/10.

Wilfred Ndidi : The Leicester City made his return from an injury-induced break for the national team. Ndidi was not at his sharpest best in the game. 5/10.

Joe Aribo : Playing in an advanced role in midfield, the Southampton star was one of the culprits that conceded possession quite cheaply.

It would be beneficial if the Super Eagles coaches tweak their plans in a bid to get the best out of his game. 5/10.

Alex Iwobi  : The Everton midfielder had an excellent game and was one of the bright sparks for the Super Eagles. He created a few chances for the team. 7/10.

Moses Simon : The Nantes man had a few exciting moments in the game but ultimately was not able to make something happen. 4.5/10.

Ademola Lookman  : Considering his lofty standards, the Atalanta winger was not effective in the game and had to be subbed off at halftime. 4/10.

Terem Moffi : The Lorient striker could not reproduce his club for for the Nigerian side albeit Calvin Bassey had a chance to set up the striker but the latter delayed the release of his pass. 3.5/10.

Samuel Chukwueze  : The Super Eagles attack came alive when Chukwueze came off the bench in the second half and was a big threat to the Portugal defenders. 6.5/10.

Frank Onyeka  : Brought on in place of Wilfred Ndidi in the second half to shore up the defensive areas but made no significance. 4/10.

Peter Etebo : The returning midfielder was lucky not to concede a penalty when he came on. 4/10.

Paul Onuachu  : The striker was guilty of delaying the flow of the game by dithering on his passes. Poor outing. 3/10.

Emmanuel Dennis : The fall guy in the heavy loss to the Portuguese as he had a chance to reduce the deficit but missed from the spot in the 81st minute. Bad decision making. 3/10