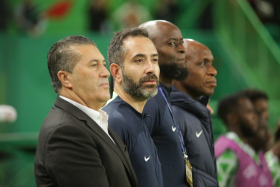 Nigeria manager Jose Peseiro has insisted that the Super Eagles did not deserve to lose 4-0 to Portugal in an international friendly on Thursday evening.

The Super Eagles were no match for the World Cup-bound European nation, suffering their fifth straight defeat in friendly matches

Nigeria showed their defensive frailty and lack of concentration by allowing Bruno Fernandes to tap in the opener with ease after seven minutes and the Manchester United star doubled the advantage from the spot in the 35th minute.

Nine minutes from time, Emmanuel Dennis could  have halved the deficit but missed from the spot and the deficit became three when Gonçalo Ramos grabbed a debut goal in the 83rd minute, before João Mário put the icing on the cake a minute later.

In quotes relayed by Portuguese sports newspaper A Bola, Peseiro said post-match : "We have to improve and improve a lot. It was a first half below what we expected, the second was much better.

"Portugal was better, they are superior, they have a great selection, but the scoreline is heavy and exaggerated because we could have made it 2-1 and then we suffered 0-3 and 0-4. We cannot concede four goals and some of them the way they were.

"It was a great emotion to be in this stadium where I spent great moments, facing Portugal, listening to the anthem... I am sad about the result, but being here and facing Portugal was a pleasure."

Peseiro has now lost four matches since his appointment as Super Eagles coach, while winning his two competitive matches in 2023 AFCON qualifying.