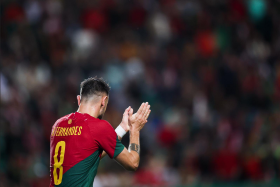 Manchester United star Bruno Fernandes was the hero for Portugal in their friendly against Nigeria on Thursday evening, scoring a first half brace in their 4-0 win over the three-time African champions.

From a Nigerian perspective, the major talking point from the game was Emmanuel Dennis failing to convert from the spot which would have reduced the deficit and changed the Super Eagles fate with nine minutes left.

With Ademola Lookman, Moses Simon and Terem Moffi substituted, many thought the captain William Troost-Ekong was going to take the spot kick but the out of form Nottingham Forest striker, who had come on for the Nantes winger five minutes earlier, insisted on taking the penalty.

AS Roma's Portugal goalkeeper Rui Patrício saved the kick by pushing the ball against the post.

Speaking post-match, Fernandes praised Rui Patrício and also noted that the Super Eagles had chances to score late on.

"I think it was a very complete and capable game. We had chances and we defended very well. Nigeria created chances towards the end and Rui Patrício was in great shape [saved a penalty]," Fernandes was quoted as saying by A Bola.

"We know we have a capable team and today that was demonstrated. It is an important step for what is to come."

Portugal used the friendly against Nigeria as preparation for their 2022 World Cup opener against Ghana next Thursday.