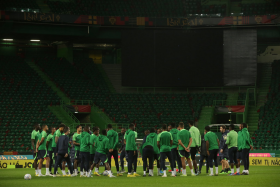 Manager Jose Peseiro has defended Emmanuel Dennis in the wake of his penalty miss during the second half of Nigeria's 4-0 defeat at the hands of Portugal on Thursday night.

With eleven minutes left on the clock, the Cypriot referee pointed to the spot after Diogo Dalot fouled Bright Osayi-Samuel in the area.

Emmanuel Dennis insisted on taking the penalty but saw his kick saved by Portugal glovesman  Rui Patrício, who pushed the ball against the post before it was cleared out of danger.

The Nottingham Forest striker would have felt confident he was going to score the penalty considering that he was on target from 12 yards in his last match for Nigeria, a 10-0 hammering of São Tomé and Príncipe back in June.

Peseiro leapt to the defence of Dennis, saying that most players in the world have missed penalty kicks.

"About that I speak with my players. In my team I won't allow someone kill one player ," Peseiro said to NFF TV.

"He missed a penalty, the next time we can train him more to score the penalty. We need to defend our players.

"Which players in the world don't miss penalties? Every player can miss a penalty. It was Dennis today, he has my protection."

Dennis was not the designated penalty taker during his time at Zorya Lugansk, Club Brugge, Cologne and Watford.

The 25-year-old's penalty conversion rate at club level is zero, failing to convert the only penalty he took while on loan at Cologne in the second half of the 2020-2021 season.