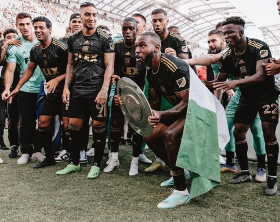 Major League Soccer champions LA Galaxy have updated their roster following the conclusion of the 2022 season.

According to the official website of the Western Conference club, twenty two players are under contract ahead of the start of pre-season preparations for the 2023 season.

LA Galaxy confirmed that they are in talks to retain five free agents including Warri-born defender Sebastien Ibeagha.

The other players are Ryan Hollingshead, Franco Escobar and Sebastian Méndez, as well as defender Eddie Segura.

Ibeagha went the distance for the Black and Gold in their shootout win against Philadelphia Union in the MLS Cup playoffs, taking his total appearances for the season to 23 in all competitions.