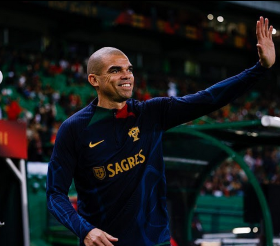 Super Eagles legend Finidi George has explained why he asked for Portugal defender Pepe's shirt shortly after the friendly  between the World Cup-bound European nation and Nigeria at the Estádio José Alvalade in Lisbon on Thursday night.

The camera caught the moment as Finidi, a two-time World Cupper with Nigeria, and Moses Simon were requesting for the jersey of the former Real Madrid star.

Pepe decided to hand his jersey to a fellow player Simon, much to the disappointment of the Super Eagles assistant coach.

The former Ajax Amsterdam and Real Betis winger revealed that his son, a Real Madrid fan, asked him to get the shirt of either Cristiano Ronaldo or Pepe who both played for Los Blancos in the past, and he had no intention to keep the jersey for himself.

Finidi was attacked on social media by several Super Eagles fans for attempting to stop Simon from swapping jerseys with the Portugal defender immediately after a humiliating defeat.

Speaking to Premium Times, Finidi said : "My son asked me two weeks ago if it’s possible to get the shirt of Ronaldo or Pepe because he’s a very big fan of Real Madrid when they were at the club and I told him I will try.

"Getting to the field, we knew Ronaldo wasn’t going to start because he was sick. So I told Pepe in the tunnel, please after the game, I would like to have the shirt for my son.

"So, he told me that was fine. After the game, I saw he was changing his shirt with one of the players and I went to remind him of what we said in the tunnel before the game started.

"He said he was going to give his shirt to somebody else, a player, a Super Eagles player playing in his club (Porto), and that definitely, I will get the shirt. I was speaking Spanish with him and that was it."