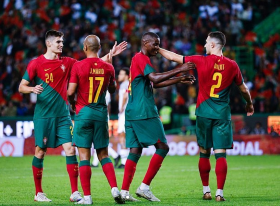 Carvalho was one of the standout performers for the Portugal national team in their friendly against Nigeria on Thursday, November 17, going the distance in a 4-0 win.

He held his own against two of the best midfielders in the Premier League in Leicester City's Wilfred Ndidi and Everton's Alex Iwobi.

The Gunners are looking forward to find a perfect deputy for Ghanaian midfielder Thomas Partey who's prone to injury.

Arsenal have been superb during the first half of the league season, topping the log with 37 points from 14 games and a five-point gap ahead of second placed Manchester City.

Mikel Arteta's men have struggled to perform at top gear whenever Partey is unavailable due to injuries. However Arteta needs him to stay fit so as to sustain their title charge.

With his availability not assured due to reoccurring injuries, Fichajes reports that Carvalho has been identified as a suitable back up for the Ghanaian.

Real Betis are reportedly prepared to sell the Portuguese star of Angolan descent so as to re-invest funds back into the club.

Despite being the most attractive suitor, Arsenal are expected to face stiff competition from Newcastle United and Leicester City for the signature of Carvalho.

Carvalho is among the twenty six players taken by Portugal manager Fernando Santos to Qatar to prosecute the 2022 FIFA World Cup.