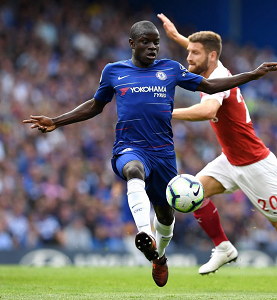 Italian giants Inter Milan and Juventus have identified Chelsea star N'Golo Kante as a target ahead of the 2023 summer transfer window.

The 2018 World Cup winner has entered the final eight months of his five-year contract that was signed in 2018.

The midfielder who's of Malian descent has spent the last six years with the Blues, after joining from Leicester City in the summer of 2016.

His season has been plagued by injuries that have kept him out of action for so long, and the chances of Chelsea offering a new contract that will please the 31-year-old looks very bleak.

According to La Repubblica, Inter Milan and Juventus are very keen to have Kante join them in 2023 and are monitoring the situation closely.

Kante will be free to sign a pre-contract agreement with foreign clubs in January if he and Chelsea do not agree to a new deal.

Apart from the Italian Serie A clubs, Ligue 1  giants Paris Saint Germain are also reportedly interested in bringing Kante to the French capital.