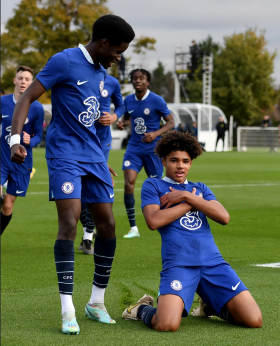 England youth international of Nigerian descent Tudor Mendel-Idowu was among the standout performers as Chelsea defeated Tottenham Hotspur 2-1 in an U18 Premier League London derby on Saturday afternoon.

Callum Olusesi and Damola Ajayi tasted action for Tottenham Hotspur, with the latter entering the game as a substitute in the 65th minute.

The first half ended as it began as it was all square, with Chelsea taking the lead through Michael Golding in the 29th minute and seconds before the halftime interval Jamie Donley tapped in at the far post to equalize for the north London club.

Midway through the second half, Josh Acheampong, with a phenomenal finish from outside the box, netted the game-winning goal after he was set up by Mendel-Idowu, who dragged the Tottenham defenders one way and shifted the ball back to the fullback.

In the 71st minute, Mendel-Idowu came close to grabbing a goal of his own, but his header was brilliantly saved by the Spurs goalkeeper.

Chelsea have now accumulated thirteen points after seven matches and sit in third place in the U18 Premier League South.