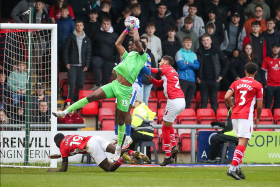 Arsenal loanee Arthur Okonkwo has shown that he can cut it in men's football, with another clean sheet for Crewe Alexandra in their 1-0 victory over Swindon Town in a League Two game at The County Ground on Saturday evening.

It was the third consecutive game in all competitions that the Anglo-Nigerian goalkeeper has not conceded a goal, starting with the 1-0 win versus Leyton Orient in the first round of the Emirates FA Cup and the second was against Colchester United in a League Two game last Saturday.

The Railwaymen won all their three matches this month in which Okonkwo posted a shutout, winning  by one-goal margins

One of Arsenal's best young players, the Hale End Academy graduate was loaned out to Crewe Alexandra to give him the opportunity to experience the rigours of first team football.

It would have been difficult for Okonkwo to get games had he remained at the Emirates Stadium as the capture of American goalkeeper Matt Turner pushed him further down the pecking order.

Overall, the 21-year-old has kept eight clean sheets in all competitions and Crewe Alexandra have conceded 24 goals in the twenty matches he started.