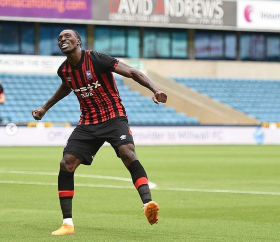 Allnigeriasoccer.com's round-up of the players of Nigerian descent on target for their respective clubs in English Football League matches on Saturday, November 19.

The Championship is on break due to the upcoming World Cup, so no matches were played in the division.

In the League One, former Flying Eagles invitee Freddie Ladapo is now one goal shy of reaching double figures this season after his strike helped Ipswich Town claim a 2-0 win over Exeter City at St James Park.

Eleven minutes in, Ladapo opened the scoring when he headed into the bottom corner after a delivery from Marcus Harness.

He has scored six goals in the League One, two in the Papa Johns Trophy and one came in the FA Cup.

Bolton Wanderers are in the playoff places after a 2-1 road win against Fleetwood Town at Highbury Stadium saw them climb to fifth position in the table with 31 points from eighteen games.

Deep in stoppage time, Dapo Afolayan netted the game-winning goal when he slotted home a low cross from a teammate.

The 25-year-old has scored three goals in the third tier this season, all of them winning goals.

Against  Peterborough United, Afolayan bagged the only goal of the game in the 86th minute, and also scored the last goal in the 75th minute of a come from behind 3-2 win over Accrington Stanley.