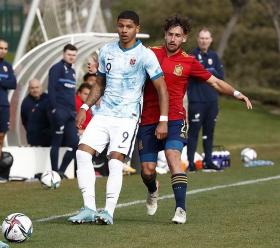 Manager Ian Burchnall could not call upon the services of the Norwegian-Nigerian striker in his side's 1-1 draw with Oxford United at The Kassam Stadium.

Forest Green Rovers revealed via a tweet that Fiabema wasn't available for selection because he's away on international duty.

The Chelsea-owned player was named in the Norway national team U20 squad for Under 20 Elite League match against Germany (November 19) and Belgium (November 23).

Against Germany today, Fiabema came on in the 63rd minute to replace Lasse Selvåg Nordås - his debut for the age group after previously earning caps for Norway at U15, U16, U17, U18 and U19 levels.

Fiabema will also miss Forest Green Rovers' Papa Johns Trophy clash against Cheltenham Town on Tuesday as the game will take place a day before Norway U20s face off with Belgium.