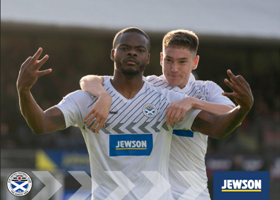 Allnigeriasoccer.com's review of the Nigeria-eligible players that found the net for their respective foreign clubs in league  matches on Saturday, November 19, 2022.

In the Turkish First League, Ibrahim Olawoyin Olasunkanmi continued his rich vein of form with a goal and assist as Ankara Keciörengücü defeated Denizlispor 2-0 at Ankara Aktepe.

After providing the assist for the opening goal seven minutes before halftime, Olawoyin doubled the advantage in the 56th minute.

And in doing so, the 24-year-old took his goal involvement in the league to ten (3 goals, 7 assists).

Dipo Akinyemi has certainly put himself in the shop window ahead of the reopening of the transfer window.

The Ayr United striker extended his lead at the top of the goalscoring charts in the Scottish Championship after finding the net in his side's 2-2 draw with Inverness Caledonian Thistle.

Eight minutes from time, Akinyemi made it 2-1 with a right footed shot but the home team equalised three minutes later.