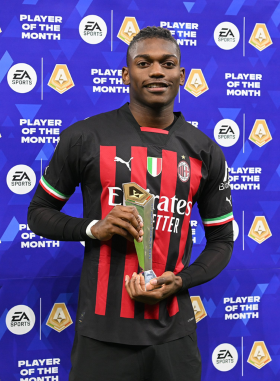 Italian Serie A defending champions AC Milan have ruled out the possibility of engaging in a swap deal that involves Rafael Leao.

Chelsea are admirers of the Milan sensation, who has been dubbed Portugal's 'Next Big Thing' thanks to his exploits in the Serie A and Champions League.

Milan on the other hand are interested in Chelsea's Armando Broja and Hakim Ziyech, but have insisted that a player-plus-cash swap deal for Leao will not be accepted, Tuttosport reports.

The Rossoneri will only sell Leao if an interested club makes a cash offer.

The Portuguese star of Angolan descent has a contract that is valid up until the summer of 2024 and talks have been held to extend his stay at the San Siro beyond the end of next season.

Milan will be forced into selling their prized asset in the summer of 2023 if there's no compromise reached towards a new contract.

Leao has scored six goals and assisted five in fourteen Serie A appearances this term.

He was an unused substitute in Portugal's recent friendly against the Super Eagles of Nigeria.