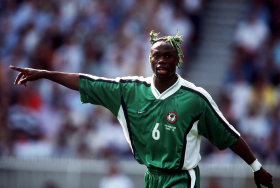 The 2022 FIFA World Cup kicks off today, 20 November 2022 and Nigeria will not be one of the 32 teams taking part in the 32nd edition of the tournament.

However football faithful have memories of Nigeria superstars that graced the tournament in the past.

Allnigeriasoccer.com here presents a combined XI of the best Nigerian players in the FIFA World Cup from USA 94 when the team made a debut appearance to Russia 2018, the last time the country participated in football's greatest showpiece.

The Super Eagles reached the round of 16 stages of the 1994 and 1998 World Cups with Peter 'Dodo Mayana' Rufai the first choice keeper at both tournaments.

Rufai conceded four goals in Nigeria's maiden appearance at the World Cup in USA 94 against Argentina and Italy in 2-1 defeats.

The three-time African champions got to the last 16 of the tournament in 1998 like the previous edition but conceded more goals, nine in total from four matches.

Eguavoen was the African version of Brazil's Cafu, defensively stout and also blessed with versatility.

Chelsea's first African player in history was part of the France 98 Super Eagles squad after gaining global recognition for his immense style of play from his position. He also featured in the 2002 edition, starting Nigeria's first two matches against Argentina and Sweden.

Babayaro was in the Golden Eaglets side that won the 1993 FIFA U-17 World Cup in Japan and the Atlanta 96 gold-winning feat in the USA.

Fondly called 'the Gentle giant' for his calm influence in central defence and his easygoing approach, the defender was a behemoth at the back.

Taribo was a no nonsense defender who took no prisoners when executing his defensive role for his country.

West was synonymous with a military man sent to guard a President or a royal family from external attack.

Famously remembered for his France 98 post match reaction to Nigeria's exit in the round of 16 stage as he wept profusely in his blood-soaked jersey and heavily bandaged head from the many duels he had with opposition forwards whom he tried to stop from causing damage.

The goal scored by Sunday Oliseh in Nigeria's 3-2 win against Spain in the France '98 World Cup will for a long time remain a reference to one of Africa's best performances in the FIFA World Cup.

The ball fell kindly to the path of the defensive midfielder after it was cleared by the Spanish defence from a long Austin Okocha throw-in.

What followed was a thunderous, powerful drive from distance that goalkeeper Andoni Zubizarreta could not have any answers to. He had a brief stint as Super Eagles coach from 2015-2016.

Former Chelsea midfielder John Obi Mikel is arguably Nigeria's most decorated footballer at club level. He makes out squad in a double pivot role in defensive midfield with Sunday Oliseh.

For the national team, the former youth international who was the second most valuable player behind Lionel Messi at the 2005 FIFA U-20 World Cup in the Netherlands played for Nigeria's Super Eagles at the World Cup and was captain in 2018 when Russia hosted the tournament.

Mikel might not have been Nigeria's most influential player but his leadership skills and experience were hugely important in a relatively inexperienced side.

The creative midfielder was clearly one of Africa's best players in each of the World Cups he played in.

In the France 98 World Cup Finals in particular, Jay Jay Okocha, so good they named twice, became unarguably Nigeria's best player in an otherwise average showing especially when issue of money seemed to cause division in the camp of the team.

His showboating and dribbling wizardry endeared him to the world in France.

Legendary Ajax Amsterdam winger Finidi George was part of the team to the 1994 and 1998 World Cups with Nigeria.

It was George who delivered the tantalizing cross for 'goal king' Rashidi Yekini to score Nigeria's first ever FIFA World Cup in USA 94.

The former Kano Pillars forward and onetime top scorer of the Nigeria Professional Football League may not be the most popular Nigerian player but his goal scoring exploit at the 2014 and 2018 FIFA World Cup tournaments makes him Nigeria's leading scorer at the mundial with four goals after the strikes against Iceland.

Former Chelsea star Moses completes our lineup is former forward Victor Moses who was part of the team to the 2014 and 2018 tournaments in Brazil and Russia.

Moses was a thorn for opposing defenders with his pace, energy and directness.