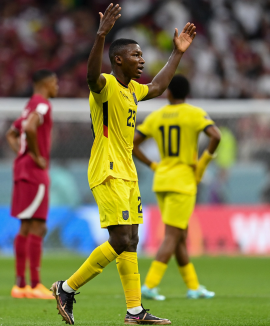 Nigeria legend Austin Jay-Jay Okocha has lauded Ecuador for doing a professional job in their 2022 World Cup opener against the host nation Qatar at the Al Bayt Stadium, Al Khor on Sunday evening.

It was a perfect start for the South Americans as they beat Qatar 2-0, the first time a host nation has lost the opening match of a World Cup.

Former West Ham striker Enner Valencia got his name on the scoresheet twice in the first half, opening the scoring from the penalty spot in the 16th minute  and the second goal was a terrific header in the 31st minute.

Qatar had a shaky start and barely created a chance over the course of ninety minutes.

Goalkeeper Saad Abdullah Al Sheeb was beaten in the third minute but the goal was disallowed for offside on video review, and he later conceded a penalty.

In the view of Okocha, Qatar did not put up much of a fight in their loss to Ecuador and suggested that the Asian champions were under pressure especially in the first half.

"They did a professional job. They got the three points that was needed but in my opinion Qatar made it a lot easier for them," Okocha said in his post-match analysis on SuperSport.

"I don't know if the pressure was a bit much on them during the first half or maybe the air conditioner might have affected the players because they are used to playing in the heat.

"You have to give credit to Ecuador because it's not easy to play against the host and they got the job done."

Senegal, without their star striker Sadio Mane, take on the Netherlands in the other Group A fixture on Monday, November 21.