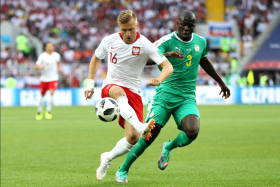 Former Nigeria manager and African football expert Gernot Rohr is confident that Senegal will advance from their group at the 2022 World Cup.

The reigning African champions have been drawn in Group A along with the host Qatar, Ecuador and the Netherlands, and will open group play against the Europeans on Monday, November 21.

Senegal will be without their star striker Sadio Mane, who withdrew from the squad due to an injury he suffered in a league game against Werder Bremen before the World Cup.

With Mane not available for selection, Rohr revealed that Senegal coach Aliou Cisse will be heavily relying on the experienced central defender Koulibaly.

On Senegal's two biggest stars, Rohr was quoted as saying by Wettbasis : "In Sadio Mane, they have a star who can make the difference on his own and in Kalidou Koulibaly, a very strong, athletic defender at the back.

"They have had the same coach in Aliou Cisse for over six years. You have several tactical options."

Koulibaly went the distance in all three group matches played by Senegal at the 2018 World Cup.