...the complete Nigerian football portal
Subscribe
Amokachi advises Peseiro on how to use Iwobi, rates Osimhen among top 5 strikers in the world
Published: November 21, 2022 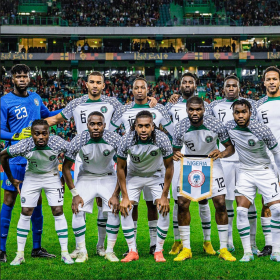 Legendary Nigeria striker Daniel Amokachi has told Super Eagles manager Jose Peseiro what to do to bring out the best in the national team players.

The two-time World Cupper underlined that Peseiro did not get his tactics right in the recent humiliating defeat to Portugal despite the array of talents at his disposal.

Amokachi cited Iwobi as he discussed the key players in the Super Eagles, saying that Peseiro needs to borrow a page from Frank Lampard's playbook and try to bring out the best in the versatile midfielder.

The Hale End Academy graduate has flourished under Lampard in a central midfield position and is among the top assist providers in the Premier League this season.

"Now he's playing under a manager that unleashed him. Now he's showing his worth. "

Amokachi only had good things to say about Victor Osimhen and believes the Napoli star is among the top five strikers in the world at the moment.

"You have Osimhen who when we lost out of the World Cup, probably he was the only player that (did well). If we had three or four Osimhens the day we played Ghana probably we would have been singing a different song now.

"We would have been there because he's a player that the whole world knows that he's in the top five strikers globally today.

Iwobi was a member of the Super Eagles squad to the 2018 World Cup while Osimhen wasn't on the plane to Russia as he was behind the likes of Odion Ighalo, Ahmed Musa, Kelechi Iheanacho and Simeon Tochukwu Nwankwo in Gernot Rohr's pecking order of attackers.