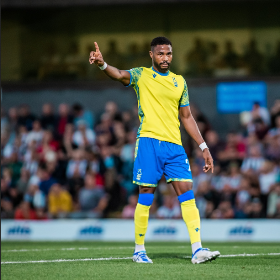 The exploits of Emmanuel Dennis at Watford in 2021-22 were always going to attract admiring glances. Having made an apparently seamless transition to life in English football, the Nigeria international proceeded to plunder 10 Premier League goals during his debut campaign.

That return would be impressive enough at the best of times, but it became even more noteworthy as said exploits were delivered for a side that suffered relegation into the Championship. There was never much chance of Dennis sticking around to aid a promotion push at Vicarage Road.

His was a star on the rise, with eye-catching performances being put in for club and country. International heartache had been endured en route to Qatar 2022 as they failed to reach the tournament due to a play-off defeat to Ghana on away goals. Ghana are expected to do little in the tournament as they are priced at 301 in the odds to win 2022 World Cup alongside the likes of Japan and Canada. Group opponents Uruguay and Portugal are expected to go much further with odds of 3 and 1.91 to reach the quarter-finals respectively.

An opportunity to rub shoulders with the likes of Neymar and Lionel Messi has passed Dennis by, but he is back in the big time at club level having completed a £20 million transfer to Nottingham Forest. Said switch has returned the quick-footed forward to the Premier League stage.

Interest was expressed by others prior to bags being packed for the City Ground, but an opportunity to link up with a side returning to the top tier of English football for the first time in 23 years proved too good to pass up.

There had, however, already been an influx of fresh faces on the banks of the River Trent prior to Dennis making his way to the East Midlands. From the outset, it was clear that competition for places was going to be fierce and that price tags could count for little in the grand scheme of things.

So it has proved, with only three Premier League starts made prior to a mid-season break for the World Cup finals being reached. One of those did see Dennis open his goal account for the Reds, with Steve Cooper saying on the back of a 1-1 draw with Aston Villa in October: “He’s had a bit of a frustrating time, Dennis. He seems to have picked up more than a few knocks that have just kept him out for a day or two and maybe ruled him out of starting games. He has offered something that we can really consider going forward now.”

While a door appeared to have been forced open by Dennis, it is in danger of swinging back in his face. He was not involved at all in Forest’s victories over Tottenham and Crystal Palace in league and cup competition immediately prior to domestic football shutting down for five weeks.

That begs the question as to whether the Super Eagles star has taken an untimely tumble down the pecking order in Nottingham and whether, with so many options at Cooper’s disposal, he can work his way back into favor.

It could even be argued that debate will begin to rage as to whether Dennis made the right decision in linking up with Forest, given how much uncertainty there was around them when putting pen to paper, as the last thing he needs is for personal career progress that was going so well to be suddenly stunted.