...the complete Nigerian football portal
Subscribe
'A great start for him' - Liverpool legend says Saka's two goals against Iran will give him confidence
Published: November 21, 2022 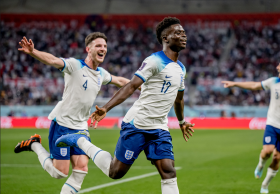 England began their 2022 World Cup campaign with an emphatic 6-2 win over Iran at the Khalifa International Stadium (Al Rayyan) on Monday afternoon.

The Three Lions were in command at the interval as Jude Bellingham, with a wonderful header, opened the scoring in the 35th minute, before Bukayo Saka in fine fashion made it two in the 43rd minute and Raheem Sterling finished a brilliantly constructed move to make it 3-0 in first half stoppage time.

On his World Cup debut, Saka produced a performance of real quality and got his second goal of the game in the 62nd minute.

Porto striker Taremi gave the Iranians inside the stadium something to shout about when he pulled one back for  the Asians in the 65th minute.

Marcus Rashford and Jack Grealish  found the net to make it six goals for England but Taremi converted a spot kick for the last goal of the entertaining contest.

Liverpool and England legend Michael Owen singled out onetime Nigeria Football Federation target Saka for praise following the winger's brilliant performance against the Iranians and believes that the goals will give him confidence.

"It was a good start for England. Saka in fact both his goals took slight deflections. That first one was a real small one, second one was slightly bigger but a great start for him," Owen said on SuperSport.

"It's important to score a lot of goals in this competition, gives yourself confidence. And when the goals are spread out hopefully a lot of players are very confident."

Saka was enjoying his football heading into the 2022 World Cup, with a goal involvement of ten (4 goals, 6 assists) for table topping Arsenal in the Premier League.