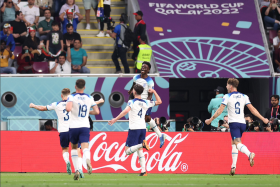 Super Eagles hopeful Chuba Akpom sent a message to Bukayo Saka after his man of the match performance in England's 6-2 rout of Iran in a World Cup game on Monday afternoon.

The Three Lions were in command at the interval as Jude Bellingham, with a wonderful header, opened the scoring in the 35th minute, before Bukayo Saka in fine fashion made it two in the 43rd minute and Raheem Sterling finished a brilliantly constructed move to make it 3-0 in first half stoppage time.

When Saka slotted into the bottom corner in the 62nd minute to increase the lead, he entered into the history books as the first England player to score a brace on his World Cup debut.

He is also the youngest player to score two goals or more in his first appearance at the World Cup since Germany legend Franz Beckenbauer in 1966.

Saka was a player of interest to the Nigeria Football Federation and erstwhile coach Gernot Rohr before he became cap-tied to his country of birth, England. 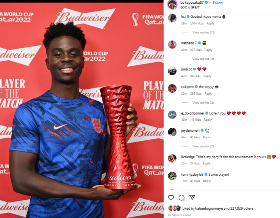 The 21-year-old took to social media to celebrate his two goals against the Iranians and wrote on Instagram, 'What A Feeling'.

Reacting to Saka's post, Akpom said 'the boyyy,' and the message was accompanied by a dizziness emoji.

Marcus Rashford and Jack Grealish were England's other goalscorers while Mehdi Taremi got Iran's goals.