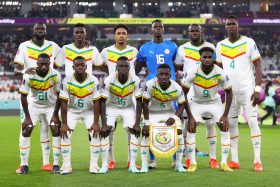 African champions, Senegal, holds the continent's biggest hopes of reaching the latter stages of the tournament but lost 2-0 to The Netherlands and Aghahowa expressed his frustrations with the attacking play of Aliou Cisse's team.

Cody Gakpo and Davy Klaassen scored the goals for 'The Oranje' in the 84th and 99th minute respectively.

"Senegal played very well but missed their scoring chances especially in the first half," Aghahowa stated on Brila FM as monitored by allnigeriasoccer.com.

"The Netherlands had only two and took their chances. That was the punishment for those missed chances.

"They (Senegal) gave a good account of themselves but The Netherland were more clinical," the onetime Wigan Athletic forward said ruefully as he responded to questions mostly asked by callers who spoke ro the radio station from their homes as the match progressed.

Hosts Qatar lost 2-0 to Ecuador in the opening match of the group and tournament in general.

Senegal are joined by Morocco, Ghana, Cameroon and Tunisia as Africa's representatives in the tournament.