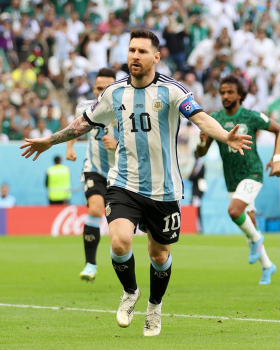 Saudi Arabia ended Argentina's 36-match unbeaten run with a shock 2-1 win over the South Americans who last won the World Cup in 1986 when they were inspired by the legendary Diego Maradona.

Argentina were leading 1-0 at halftime and had to deal with the offside traps of the Green Falcons with three goals ruled out for offsides within 45 minutes.

"This same incident was witnessed in the game between England and Iran but there was no VAR check," Udeze who missed Nigeria's group game against Argentina in the group stages of the 2002 World Cup in Korea/Japan but played in the matches against Sweden and England told Brila FM.

"England were denied a clear penalty by the referee and VAR but that not given. However the referee and the VAR didn't hesitate to award a penalty to Argentina in a similar manner against Saudi Arabia.

"VAR is brought to the game to ensure there's equity and to cut off errors but it should be consistent with the decisions.

In his prediction for the game, Udeze who played for West Bromwich Albion believed the game will end in a 3-0 win for the South Americans but was proved wrong.

"Messi's goal was indeed an offside. The new VAR is better, it's an improvement. Even if it's finger, the camera will pick the offside. Saudi Arabia are playing hard, being physical to put fears into the Argentine players.

"It was a very big shock how the game turned out. This is a big, massive result for Saudi Arabia. I never believed that Argentina will beat them by more than 2-0 or 3-0 but nobody saw this coming," Udeze admitted.