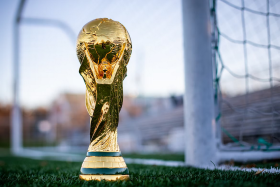 The 2022 FIFA World Cup is finally underway. OddsChecker, which compares World Cup odds and offers, have made Brazil the favourites for the tournament. And if they win the final in Lusail’s Iconic Stadium it will be a record-breaking sixth success, and their first in 20 years.

But for fans of Nigeria, it will be a bittersweet occasion. On the one hand, football's grandest spectacle is here, and fans can revel in the fact that for four weeks straight the world's finest will do battle for the honour of being called world champions. On the other hand, however, Qatar 2022 will mark just the second time in 28 years that the Super Eagles haven’t qualified for the tournament.

We all remember the ugly scenes which followed Nigeria’s disappointing defeat in World Cup qualifying to Ghana, when they lost on away goals courtesy of a 1-1 draw in Lagos, allowing the Black Stars safe passage to football’s grandest spectacle. This year, Nigerians will have to watch on as neutrals, but that wasn’t the case four years ago.

Within four minutes of the last 16

Nigeria’s campaign four years ago couldn’t have gotten off to a worse start. They lost their opening game to Croatia 2-0, when a Peter Etebo own goal and Luka Modric penalty consigned them to a disappointing 2-0 defeat. But little did they know then that the Croatians would prove themselves to be an impressive outfit.

Zlatko Dalić’s side won all of three of their games in Group D, including a 3-0 drubbing against Argentina. And their performance opened the door for the Super Eagles to sneak into the last 16.

What was imperative to their campaign was their second group game against Iceland. The Icelandics were fresh off the back of reaching the quarterfinals at Euro 2016 and were expected to pick up the victory when the pair faced off. But they didn’t bank on the brilliance of Ahmed Musa, whose double gave the Super Eagles a deserved 2-0 victory.

With that, it all went down to the final game. Iceland needed to beat Croatia, a task that they could not manage. As such, Nigeria knew all they had to do was avoid defeat against Argentina to secure their spot in the last 16.

And it looked like they would do exactly that when Victor Moses’ second-half penalty cancelled out Lionel Messi’s brilliant opener. But in the end, it was the Argentinians whose quality shone through. Centre-back Marcos Rojo thumped home with just four minutes remaining in St. Petersburg to seal a date with France while the Nigerians were sent packing.