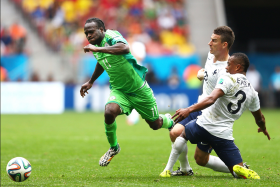 2013 Africa Cup of Nations winner Victor Moses is among the sixteen players to score a goal at the World Cup while on the books of Chelsea.

Raheem Sterling became the latest Chelsea player to score at the World Cup when he found the net for England in their 6-2 hammering of Iran on Monday in their opening Group B fixture.

In first half stoppage time, Sterling flicked in a shot with the outside of his boot to give Gareth Southgate's team a 3-0 lead.

In what was his final game for Nigeria on June 26, 2018, Victor Moses converted a spot kick in the 51st minute to cancel out Lionel Messi's opening goal but the Super Eagles failed to progress to the last sixteen after conceding another goal in the 86th minute.

Moses provided the assist for Ahmed Musa's opening goal in a 2-0 win over Iceland in Nigeria' second group game in Russia.

Celestine Babayaro and John Obi Mikel appeared for the Super Eagles at the World Cup as Chelsea players but did not get on the scoresheet.