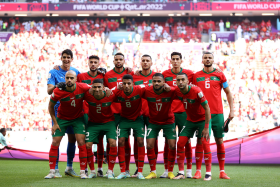 Former Super Eagles left back Ifeanyi Udeze during his analysis of the first half of the Morocco versus Croatia Group E opener believes that The Atlas Lions will  ultimately win the game if they score first in the second half after a cagey first 45 minutes.

Morocco had a few goal scoring chances in the first half especially from set pieces but were stopped by the defence of the 2018 World Cup runners up in Russia.

Udeze who played for Nigeria at the 2002 World Cup in Korea/Japan said the following on how the game has panned out so far.

"I think both coaches will be happy with the attitudes of their players and will be pushing their players to do more," the former West Brom defender said in Brila FM, Lagos.

"Croatia will come out with pressure while Morocco will find their best to find a way to counter attack. They have Hakim Ziyech and Hakimi and around the 18 yard area, they will try and win free kicks.

"If Morocco score first, Croatia will find it difficult to come back.

"I didn't see much of Modric until the end of the first half. I'm happy to see Hakim Ziyech back in the Moroccan team. The Croatians sat back and hoped to get Morocco on the counter," Udeze stated.

The second half has just begun with Croatia making a halftime substitution.