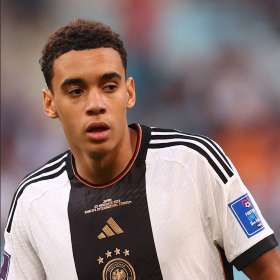 Former Nigeria Football Federation target and Chelsea academy product Jamal Musiala made his FIFA World Cup bow and was in excellent form on Wednesday in Germany's shock narrow 1-2 defeat to Japan at the Khalifa International Stadium.

His fellow international of Nigerian descent, Karim Adeyemi was an unused substitute in the game.

Japan had an early goal in the Group E match 'scored' by Wataru Endo ruled out for offside but ultimately won their first World Cup game.

Germany then had a couple of chances which the duo of Antonio Rudiger and İlkay Gündoğan could not convert.

Musiala created two chances in the first half and offered attacking width for the Germans as he was offered a lot of freedom but lacked the composure to finish off a few decent shots.

Gundogan put Germany ahead from the penalty spot in the 33rd minute following a contentious referee call after Ream... was challenged in the box.

Musiala let fly a shot at the edge of the box a minute before the break but his effort flew wide off the target.

Germany thought they doubled their lead when Kai Havertz oked home the ball after Joshua Kimmich's shot was parried by the Japanese keeper to the path of Serge Gnabry whose low cross was met by the Chelsea forward.

However Thomas Muller was standing in an offside position when he slotted in the ball.

Musiala's 'dancing feet' thrilled the Germans in the stand but his eventual 53rd minute shot skewed off target as he cut in from the right flank into the Japanese penalty area.

With an hour played in the game, Gundogan hot the foot of the post with a low shot and saw the ball go out for goal kick much to the relief of the Asians.

Manuel Neuer made some strings of world class saves but had no answers to the 75th and 83rd minutes goals scored by Japan substitutes, Ritsu Doan and former Arsenal striker Takuma Asano.

Musiala was substituted off by Mario Gotze in the 79th minute.