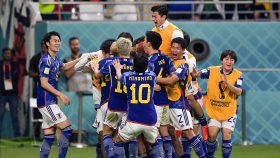 Japan delivered a shocking blow to one of the pre-tournament favourites Germany Wednesday afternoon in the first Group E game of the 2022 FIFA World Cup in Qatar with a 2-1 victory just 24 hours after Saudi Arabia handed same measure of punishment to South American champions Argentina.

Wednesday's performance and the quality of goals scored by the Samurai Blues especially the first elicited the praises of former Nigeria international Efan Ekoku.

Ekoku was on commentary duties during the game and had great tributes to make about the strike of Ritsu Doan.

The Nigerian began by speaking about the difficulty of goalkeeper Manuel Neuer to keep away that goal which inadvertently led to the equaliser.

"He's actually been a good goalkeeper (making reference to the German shotstopper). He tries to scoop the ball away, he knows he can't get it wide.

"He's looking for distance and maybe some elevation as well. He (Neuer) doesn't get that kind of luck and there he is (Doan). Not quite a straight tap-in.

"We've seen those type side-footed over the crossbar. That was a cool finish. I just stared at the German goal in the first half that was coming.

"Absolutely this one has been about 15 or so minutes, a well deserved equaliser," Ekoku who played for Norwich City in the English topflight said in the press box.

Spain and Costa Rica are the other teams vying for two round of 16 qualification tickets with Germany and Japan.