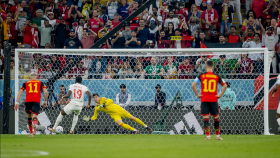 Adekugbe was named to the substitute bench alongside former Super Eagles hopeful Ike Ugbo, the latter being a former Chelsea starlet who opted not to represent Nigeria after he alleged to be shunned by erstwhile Super Eagles head coach Gernot Rohr.

Three was indeed an interest shown by the Nigeria Football Federation in Ugbo but Rohr did not follow that interest up with a personal conversation with the striker.

Adekugbe came off in the second half of the game between their adopted nation and the second-best ranked national side in the world.

Despite Canada's best efforts to redeem that situation through the duo of Jonathan David and Junior Hoilett , it was Belgium, semifinalists at the 2018 FIFA World Cup in Russia that scored through Michy Batshuayi when he latched onto a through long pass by Toby Alderweireld in the 44th minute to strike the ball powerfully to the back of the net.

Adekugbe did not have all the time in the game to influence the outcome from his left back role a bit more but did enough to make his quality shine through.