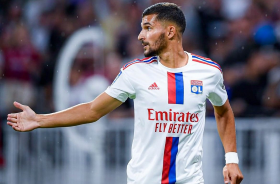 Per reports from La Gazzetta dello Sport, via MilanNews, the Serie A defending champions are considering making a smart move ahead of their rivals in the race to sign the midfielder of Algerian descent.

Aouar's existing contract with Olympique Lyonnais will expire at the end of the ongoing season and he is not expected to sign an extension with the French Ligue 1 side.

It has been claimed that the France international could be available for as low as €8m in January 2023.

RMC claimed that Lyon turned down a bid of 38 million euros from Arsenal for the Lyon playmaker in the summer of 2020.

With Arsenal now looking forward to reinforcing their midfield, now may be a good time to make a move for the 24-year-old.

Aouar has played six times in the French topflight for Lyon and has scored one goal in the ongoing campaign.