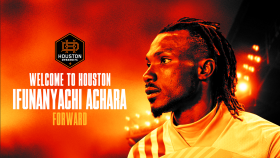 With a statement on their official website, Major League Soccer club Houston Dynamo have announced that they have selected Nigerian-born striker Ifunanyachi Achara in Stage 2 of the MLS Re-Entry Draft.

Achara became a free agent last month after the Canadian club declined the option to extend his stay.

The 25-year-old was selected 25th overall in the 2020 MLS SuperDraft out of Georgetown University and captained the Hoyas to the NCAA National Championship as a senior.

Houston Dynamo have not yet signed Achara and will be required to make a genuine offer to Achara within seven days.

If an agreement cannot be reached between the Dynamo and Achara, the drafting club will hold the Right of First Refusal for Achara in MLS.

The hardworking striker had a promising start to his Toronto career, scoring on his Major League Soccer debut against New York City on March 7, 2020, a feat that earned him a place in the MLS Team of the Week.