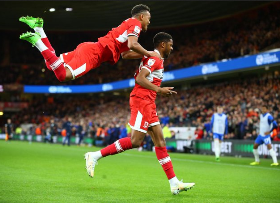 With Carrick in the Middlesbrough dugout, the Hale End Academy product has gone on to score four goals, netting against Preston North End, Hull City, Bristol City, and Blackpool, while registering an assist versus Norwich City.

When Carrick was questioned about whether Akpom had profited from a change in playing style, the former Manchester United interim manager responded that Akpom had seized the opportunity with both hands.

"I wouldn't say I've changed it. Yeah, we've gone about playing football in a certain way and trying to go in a certain direction," Carrick was quoted as saying by Teesside Live.

"We try and put the players in positions we feel we'll get the best out of them. Chuba has been great and he's hit the ground running since I came through the door.

"Goals help, of course, and that gets the headlines, but his performances for the team and the work he does for the team is excellent. All the players have really brought into that and I think we look like a real good team.

"Within that, individuals can shine and flourish and Chuba's goals have obviously done that for him. It's been a great spell and hopefully that will continue."

After being on loan in Greece with PAOK, Akpom returned to Middlesbrough in the summer and began training with the youth team as he awaited a call from his agent informing him of his next destination.

However, Akpom is now enjoying a stunning run of form and has become a fan favorite at the club.

The 27-year-old is one goal away from the top spot of the scorers' chart, having scored eight goals in fourteen Sky Bet Championship appearances this term.