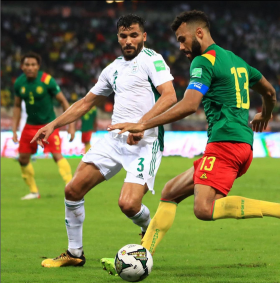 Former Nigeria manager Gernot Rohr expects Cameroon to be the dark horses in Group G of the 2022 World Cup and has warned the other countries in the group that the Indomitable Lions can cause a surprise.

The German noted that Cameroon have a fantastic goalkeeper in André Onana and are solid in defence.

The Indomitable Lions have one of the best attacks in Africa, with Eric Maxim Choupo-Moting (Bayern Munich), Bryan Mbeumo (Brentford), Vincent Aboubakar (Al Nassr) and Karl Toko Ekambi (Lyon) among the strikers named in the squad to Qatar.

The experienced Choupo-Moting is a leader on and off the pitch and was in great form heading into the World Cup, scoring eleven goals in sixteen appearances for Bayern Munich.

"It would be a surprise if they don't finish last when you look at the world rankings Even in this group, they can surprise you. They can finish third, or even a sensational second," Rohr said to wettbasis.

"So morally they are very strong. They have gained momentum since Samuel Eto'o became federation president and there could well be an upset. Defensively they are strong anyway. The goalkeeper is also stable.

"They are well-manned, especially on the offensive. Eric-Maxim Choupo-Moting is on form just in time and that will help the Cameroonians."

Cameroon have lost their last seven matches at the World Cup, including four against European opposition.

After their opener against Switzerland on Thursday, the team led by the legendary  African central defender Rigobert Song will do battle with Serbia and Brazil.