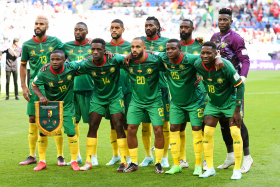 Former Super Eagles left back Ifeanyi Udeze has expressed disappointment in the 1-0 defeat of Cameroon against Switzerland in their opening Group game of the Qatar 2022 FIFA World Cup.

Breel Embolo whose father is from Cameroon but plays international football for Switzerland scored the decisive goal for the Europeans early in the second half but the Indomitable Lions could not restore parity as African teams at the tournament continue their search for the first win in the Gulf.

"The Cameroonians ought to have attacked Switzerland but even with the time running out they were still defending. Perhaps they felt it was better they stopped the Swiss from scoring more goals," the defender who played two games for Nigeria at the 2002 FIFA World Cup in Koreas/Japan said on Brila FM on Thursday.

"Cameroon came out of the second half playing from the wings, and that opened up their midfield. It will affected them more. They were lucky not to have conceded more goals. I actually thought they would concede more.

"I didn't really fancy it but we all felt that something could change," the former West Brom and PAOK of Greece defender told Brila FM Lagos.

In the decision to substitute Bayern Munich striker Choupo - Moting for Vincent Aboubakar, Udeze believe the tempo of the game must have played a role in that.

"The tempo of the game would have been too much for Aboubakar so he couldn't start but he's an experienced player and is good enough to change games on his day," Udeze added.

Ghana will face Portugal 5pm Nigerian time as African teams at the tournament hope to get their first win.