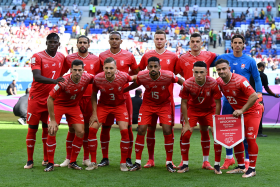 Former Super Eagles captain Austin Jay-Jay Okocha believes that Cameroon were lucky not to have conceded more goals in their 1-0 defeat against Switzerland in Group G of the 2022 FIFA World Cup Qatar 2022 Thursday afternoon.

Cameroon became the second African side to be beaten by their group opponents in the first round of group matches at the ongoing tournament after Senegal's 2-0 loss to Netherlands on Monday.

Tunisia and Morocco held their group opponents Denmark and Croatia respectively to scoreless draws in their first matches.

Breel Embelo who is of Cameroon descent scored the decisive goal for Switzerland but another player who has African heritage from Nigeria, Manuel Akanji, missed a chance to double their lead in the 45th minute.

"The best chance of the half and it could have been the worst time to concede, " the onetime Bolton Wanderers, PSG and Fenerbahce midfield maestro stated on SuperSport.

"I think the manager couldn't believe how free Akanji was and it was more difficult to miss that (headed chance) than hit the target and the Cameroonians were lucky not to have have conceded there."

Cameroon are back in action on Monday, November 28 when they face Serbia at the Al Janoub Stadium, Al Wakrah.