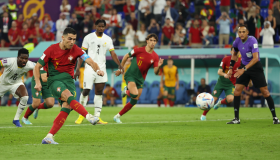 Nigerians have taken to their social media handles to express disappointment as regards the performance of Arsenal star Thomas Partey in Ghana's loss to Portugal.

Ghana suffered a 3-2 loss against Portugal in a Group H matchday one encounter of the 2022 FIFA World Cup played at the Stadium 974 on Thursday evening.

Cristiano Ronaldo opened the scoring from the penalty spot in the 65th minute after he was fouled in the box.

Ghana responded with an equalizer from Andre Ayẹw in the 73rd minute, tucking the ball home with a footed shot that was assisted by Mohammed Kudus.

The Europeans were back in front just five minutes later as Joao Felix profited from a sublime pass by Bruno Fernandes.

Portugal's lead was extended to two in the 80th minute through substitute Rafael Leao after he combined with Bruno Fernandes.

Osman Bakari went on to reduce the deficit in the 89th minute.

Partey was not influential in the game as he failed to replicate his club form at international level.

The stinker has prompted several Nigerian  fans to come for him on social media, with the majority blasting the Arsenal star for having a lackadaisical attitude.

Partey what is wrong!!!! Hold that midfield

Partey no dey this match

Partey been too poor in this game

Partey will not play like this for Arteta sha. He has been bad all game