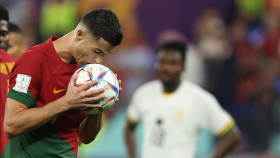 Former Super Eagles striker Julius Aghahowa has taken a swipe at the decision of the center referee not to check the monitor for the penalty goal scored by Cristiano Ronaldo in Portugal's 3-2 win over Ghana Thursday evening.

The Group H clash looked to be any team's for the taking but Portugal went in front in the 64th minute through Ronaldo who was on Tuesday relieved of his Manchester United contract.

That irked Aghahowa who was Nigeria's star of the 2002 World Cup in Korda/Japan where he scored the Eagles' goal in the 2-1 defeat to Sweden.

"The penalty awarded to Portugal demoralized Ghana. The referee should have gone to the monitor to confirm that it was indeed a penalty. He didn't and that affected the Ghanaians.

"The penalty is contestable. My problem with that is the ref didn't even go to check," Aghahowa who played for European teams, Shakhtar Donetsk and Wigan Athletic told Brila FM.

Aghahowa before the dramatic turnaround also berated the reckless challenges of right back Alidu Seidu.

"Alidu Seidu's action was uncalled for. He could have been sent off for that and his team will suffer for it. African players have to be disciplined at this level," Aghahowa further stated. .