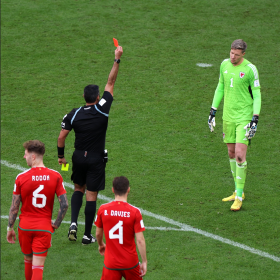 Former Super Eagles captain Austin Jay Jay Okocha believes Wales never looked like a team willing to give all they could to win their second Group B game of the 2022 FIFA World Cup Qatar 2022.

Iran defeated the 10-man Welsh side 2-0 with goals in added time to claim all three points to stand a chance of progressing into the round of 16 stages.

Okocha who is on analysis duties for Supersport was particularly impressed by the second half performance of the Iranians.

"Yes (it was a late drama) they left it late (in reference to Iran) well deserved as well because in the second half they kept probing.

"They (Iran) were the better team I think and got rewarded.

"Maybe we will say the red card (to Wayne Hennessey) contributed to it but the Welsh team never looked as if they were willing to come out and win the game.

"They were very defensive and got punished as well," the onetime PSG and Bolton Wanderers midfielder stressed.

Earlier in the match, Okocha commented on the disallowed goal 'scored' by the Iranians.

Ali Gholizadeh pounced on a Connor Roberts error, rounded the keeper and score but it was overturned by a VAR decision.

"That was their best passage in the game. It came from a Welsh player as well. Sardar Azmoun should have had the shot (instead of passing to teammate)," Okocha said of the unselfish play of the mercurial Iranian striker