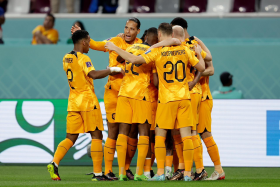 Former Nigeria international Efan Ekoku on Friday evening put the blame squarely on two Dutch players for the goal scored by Ecuador's Enner Valencia in The Netherlands' 1-1 draw against Ecuador in both teams' second Group A match of the FIFA World Cup Qatar 2022.

Ekoku was on commentary duty for the game and berated the experienced duo of Virgil van Dijk and De Jong for Valencia's equaliser after Cody Gakpo's goal.

"The only question is: did he stay onside? If Valencia already knew. Estupinan have a real Canon of a left foot and the goalkeeper wasn't able to hold it," the onetime Norwich City star said on the World Cup world feed.

"The goalkeeper came towards that ball. It was a casual play from Frenkie de Jong. They were outmuscled in the middle of the park. The right back was onside, clearly onside, played on by Nathan Ake.

"Virgil van Dijk has got to get the ball a lot quicker. That was casual defending. You've got to throw yourself to the challenge.

"The Dutch captain, I think, he was almost culpable as Frank de Hong as he payed a casual pass to a teammate," Ekoku who was part of the Super Eagles side that won the 1994 Africa Cup of Nations in Tunisia said.

Ecuador will face Senegal while the Netherlands will play hosts Qatar who are already eliminated from the tournament in the third round of matches in the group.