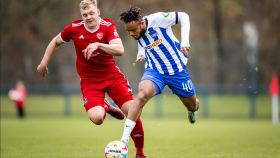 Super Eagles winger Chidera Ejuke was among the scorers as Hertha Berlin defeated Ludwigsfelder FC 5-0 in a friendly on Saturday.

Manager Sandro Schwarz set up his team in a 4-2-3-1 formation with the Nigeria international deployed as the right sided attacking midfielder.

In the 34th minute, Ejuke doubled Hertha Berlin's advantage by hitting a controlled effort into the bottom right-hand corner, before he was replaced at the start of the second half.

Scherhant, Richter, Lee and Kanga were also on target for the Old Lady in their comprehensive win over Ludwigsfelder, who play in the Oberliga - the fifth tier of German football.

Ejuke has been busy with Hertha Berlin this World Cup break. He helped the club finish third in the Wörthersee Cup last weekend.

The 24-year-old has been involved in all the matches played by the capital club this season, sixteen in total, registering three assists in 837 minutes of action.

He is on loan at Hertha Berlin from CSKA Moscow.