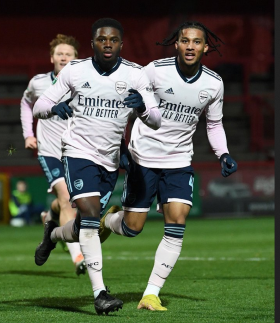 Arsenal U21s were back in Premier League Cup action against Swansea City on Saturday at the Landore Training Ground.

The young Gunners maintained their unbeaten run in the competition, thrashing the Swans 4-1 with three Nigeria-eligible youngsters featuring for the visitors.

Four first half goals from Cătălin Cîrjan (2), Butler-Oyedeji and Charles Sagoe Jr.ended the game as a contest at the interval.

The Anglo-Nigerian doubled Arsenal's lead when he fired into the bottom corner from the edge of the box five minutes before half time and five minutes into stoppage time he turned from scorer to provider when he assisted Cîrjan to put the visitors 4-0 up.

The home team pulled one back through Corey Hurford who smashed home the rebound after the goalkeeper saved Whittaker's shot in the 87th minute.