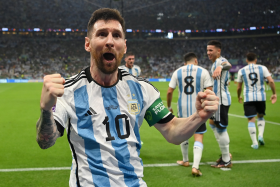 Paris Saint Germain star Lionel Messi once again came to the rescue of Argentina by scoring the decisive opener in their  victory over Mexico on Saturday night.

Messi scored La Albiceleste's second goal of the tournament and ended up assisting the third, earning him the Man of the Match award.

And in doing so, the 35-year-old took his tally in the World Cup to eight, equaling the legendary Diego Maradona's record for Argentina in the process.

The Lionel Scaloni led side triumphed 2-0 over the El Tri of Mexico in a Group C match day two encounter played at the Lusail Iconic Stadium, Lusail

Messi who has won the Ballon d'Or award a record seven times broke the deadlock in the 64th minute with a left footed strike from outside the box.

In the 87th minute, Argentina extended their lead through Enzo Fernández who curled home after he was picked out by Messi.

Messi fans across Nigeria have taken to their Twitter handles to appreciate the talent of the Rosario born footballer.

Here are some of the tweets:

Maradona is still there greatest Argentine footballer ever, Messi doesn't have a world cup Maradona does

Imagine Maradona in the stadium when Messi scored that goal… 🤣

Me I no de argue with anybody since so many years ago. Lionel Messi is better than any footballer that has ever played the game. It's was never up for debate. Some certain fans started the comparison which never existed.

Only one 𓃵 Lionel Messi

Greatest of all time.
Lionel Messi.

Messi touched the past and future today.

Equalling Maradona's 8goals in 21 , then setting up the youngest Argentina Goal

Argentina take the lead with MESSI. He equal Lengendary Diego Maradona goals in World Cup. Both have 8 goals in 21 Matches.