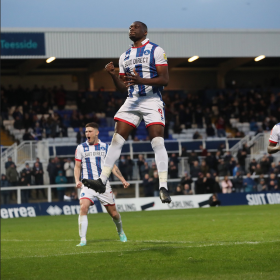 London-born Nigerian striker Josh Umerah continued his rich vein of form by netting two goals for Hartlepool United in a 3-1 win over Harrogate Town in the second round of the FA Cup on Saturday, November 26.

Umerah has been firing on all cylinders this season and his brace versus Harrogate Town took his tally for the season to ten in all competitions.

The 25-year-old has mustered seven goals in the EFL League Two and three in the FA Cup.

He made a return to the starting line-up against Harrogate Town after missing last weekend's defeat to Barrow due to accumulated bookings.

After Callum Cooke opened the scoring for Hartlepool United, Umerah was presented with a chance to double the advantage from the spot in the fourth minute of first half stoppage time after he was brought down in the box  by Joe Mattock.

The Hartlepool United number 9 sent the goalkeeper the wrong way for his ninth goal of the season.

And in the 74th minute, he got his brace, finishing emphatically from close range to make it 3-0 .

Hartlepool United will discover their next opponents in the FA Cup  when the third round draw takes place at Anfield on Monday, November 28.