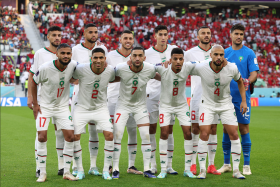 The Atlas Lions of Morocco pulled off a huge shock in a World Cup Group F clash at the Al Thumama Stadium on Sunday by beating Belgium 2-0 courtesy of goals from Abdelhamid Sabiri and Zakaria Aboukhlal.

With their victory over the European nation, Morocco only need to avoid suffering a defeat in their final group game against Canada to be sure of progressing to the last sixteen of the tournament.

The African side thought they had opened the scoring late in the first half through Hakim Ziyech  but the goal was chalked off for offside after a VAR review.

Seventeen minutes from time, Sabiri became the first player to score from a direct freekick at the 2022 World Cup, and Aboukhlal sealed the win when he fired into the top corner in stoppage time.

Three-time World Cupper and Nigeria legend Austin Okocha, who was on punditry duties for SuperSport, revealed shortly after the game that he loved the Atlas Lions' win because of the way they managed the game after taking the lead.

Okocha said : "It's a well deserved win today and what I love about the win is after they scored they managed the game - the way they defended in numbers, the way they took responsibility to make sure that this Belgium team does not get anything against them today.

"I am overwhelmed with joy and I think we will  say congratulations to Morocco."

Morocco will wrap up group play on Thursday evening with a game against Ike Ugbo's Canada at the Al Thumama Stadium, Doha.