'His father is Nigerian, reminds me of Mbappe' - African legend Bwalya tips Musiala for big things 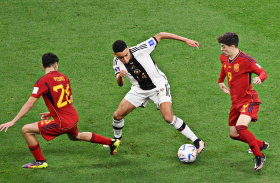 Aged only 19, Musiala was arguably the standout player for the Germans and capped off his outstanding display with the assist for the German equaliser netted by Niclas Fullkrug in the 83rd minute.

Six minutes after Alvaro Morata opened the scoring, the Germany number 14 had a great chance to restore parity but was denied by a save from Spain goalkeeper Unai Simon.

Musiala has directly participated in 22 goals (12 goals, 10 assists) for Bayern Munich this season and he has taken his form to Qatar, having also impressed in Germany's opener against Japan.

When reviewing the game between Spain and Germany, SuperSports TV broadcaster Thomas Mlambo asked Bwalya to give the lowdown on Musiala's African connection.

Bwalya said : "His father is Nigerian, mother is German. Went to England when he was very, very young.

"And so he decided to play for Germany which so delighted the Germans of course. "

The 1988 Olympic Games star went on to explain why he thinks Musiala is a carbon copy of Kylian Mbappe.

"Very, very talented. Very quick. He reminds me a bit of Mbappe, that kind of speed, the turn and control. He's one for the future certainly," Bwalya concluded.