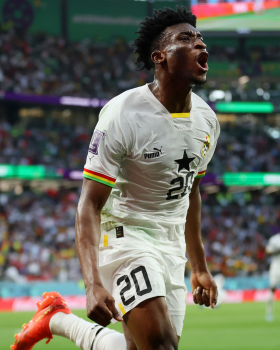 Ajax Amsterdam star Mohammed Kudus put in a heroic performance to earn the Black Stars of Ghana their first win at the 2022 FIFA World Cup.

Ghana were 3-2 winners over South Korea in a Group H matchday two encounter played at the Education City Stadium on Monday afternoon.

Kudus was instrumental for Otto Addo's men, scoring a brace in the dramatic win as he picked up the Man of The Match Award.

Mohammed Salisu put the West African nation ahead in the 24th minute with a left footed shot.

The lead was extended to two in the 34th minute after Kudus headed in a cross from Jordan Ayew.

South Korea then began to push for a comeback as Cho Gue-sung reduced the deficit in the 58th minute after combining with Lee Kang-in.

Cho Gue-sung went on to draw his side level just three minutes after scoring his first.

The party however got spoiled as Kudus got his second of the day in the 68th minute with a left footed strike.

The 22-year-old with his brace engraved his name in the book of history as he became the second youngest African player to score two goals in a World Cup match, after Ahmed Musa for Nigeria against Argentina in 2014.

2 - At 22 years and 118 days old, Mohammed Kudus is the second youngest African player to score two goals in a World Cup match, after Ahmed Musa (21y 254d) for Nigeria against Argentina in 2014. Kudos. pic.twitter.com/4xkKDkJQLH

Kudus has drawn the attention of Nigerians to himself with the historic performance despite being part of the Ghana squad that eliminated the Super Eagles  during the World Cup playoffs.

Here are some of the best tweets :

KUDUS…. The biggest Club in England awaits you ..

I have seen enough. Kudus is EPL worthy..

This Kudus boy is very very special!
Workaholic and very technical. This kind of players are rare.

This Kudus guy is certainly one of the best players from Africa at the moment.

Impressive form for the Black Stars as they lead again. #Qatar2022

Kudus has been really outstanding in this competition. A wonderful player

Kudus is getting snatched up before JAN.

Kudus told us Neymar isn't better than him and he wasn't joking. What a performance!