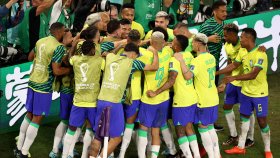 Nigeria legend Austin Jay-Jay Okocha on Monday evening heaped plaudits on the quality of goal scored by Brazil midfielder Casemiro in the victory over Switzerland in Group G of the 2022 FIFA World Cup in Qatar.

The Manchester United defensive midfielder fired a delightful shot past the Switzerland goalkeeper in what proved to be Brazil's only goal of the match after VAR denied Vinicius Junior's earlier 'goal' for offside.

Okocha was one of the analysts in the live studio of Supersport for the coverage of the game and responded to questions from presenter Thomas Mlambo along with the duo of legends Michael Owen and Kalusha Bwalya.

"Every striker will be proud of that goal. He's got it in his locker. There was a deflection but he will take it any day," the Nigerian said.

"I mean he was on target as well but you can see from the keeper's reaction that it was a deflection," former PSG and Bolton Wanderers star Okocha said on Monday.

"There is (joy) playing for one's fatherland. Switzerland have shown us today that if you find the fight way to play against Brazil that you might get something out of the game.

"When it gets to the knockout stage, all you need is to get it right on the day and you might cause an upset.

Okocha accepted that Switzerland was not expected to be an easy ride for the Selecao but the outcome turned out differently.

"We knew it was going to be tight but we didn't expect it to be this close.

"Like you rightly said, the goal coming from a defensive midfield player but it's good to see players taking responsibility knowing that when things are not going their way, they could go ahead and win matches for their teams.

"It's great to see the Brazilian team celebrating there, booking their spot in the knockout stage," Okocha enthused.

Brazil will play against Cameroon in their last group game on Friday.